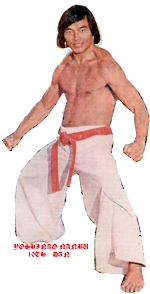 Yoshinao Nanbu started life in 1943 within a very strong martial arts background, his ancestry having many Samurai in its past members. His grandfather, being Yoko Zuna, a famous Sumotori. His father was a 5th Dan in Judo (the gentle way). I remember speaking to Mr Nanbu in about 1975/6/ at the Bushiki Karate Do club at Humber road in Beeston, Nottingham, and he told me that he had started training in the martial arts at the age of four or five years, when he learnt Judo from his father. Then, after a few years he decided to learn Kendo under the guidance of an uncle.

Mr Nanbu took up Karate whilst at university in Osaka, following the Instruction of Master Tani 8th Dan the founder of the style Shukokai, and Master Tanaka, Mr Nanbu soon became a very accomplished Karateka indeed, winning the University of Japan Championship in 1963. Shortly after this he was invited by Mr Henry Plee to come over to France to compete in some tournaments in Europe. There again Mr Nanbu won numerous tournaments including the French Cup.

In about 1965/6 Mr Nanbu returned to Japan to further enrich his knowledge and understanding of the Martial Arts. Whilst he was in Japan Mr Tani asked him to returnee to Europe and develop Shukokai Karate throughout Europe, Shukokai being the Style of Karate that Mr Nanbu practised. Mr Nanbu accomplished this task very successfully. 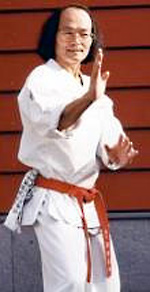 Later in the ’60s, Mr Nanbu returned to Japan once more, this time to develop his own style, this he Called Sankukai (the association of the three elements – The Mind, The Body and The Spirit). It was physically hard and strong, but the students were able to develop fairly early on, he included Sanchin and Tensho to build muscle power so that students wouldn’t have to wait until they were black belts to be good fighters. In about 1968 or 69 when Mr Nanbu put his thoughts on Sankukai together and discussed them with some of the top karate instructors of Japan, there was hostility from some of them, but in general his thoughts were accepted with approval.

Mr Nanbu soon received the approval of the Shimane University in Japan, one of the top Shukokai Universities, the Simane University changed to Sankukai. Having established his style in Japan, Mr Nanbu returned to France and opened a new Dojo in Paris and invited Instructors from various styles to come and see how Sankukai worked. Two instructors from England were at one of these demonstrations, and as a result they both changed from their original styles to Sankukai and took all of their students over to Sankukai with them. In 1970 the Association of International Karate Sankukai GB (A.I.K.S.gb) was born. 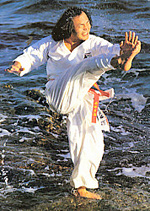 In about October 1974 just after my first grading, Mr Nanbu came over to the Bushiki Karate Do club in Ilkeston near Derby and Nottingham. He took the lesson on the Friday evening, then at the weekend we all went up to Belle View, Manchester to (if I remember rightly) the B.K.C. National Championships, and A.I.K.S. (gb.) presented an astonishing display of self defence and weaponry in the
form of Mr Yoshinao Nanbu being the star of the demonstration. I understand that following that display by Mr Nanbu, the membership of A.I.K.S. GB grew at a great rate.

Mr Nanbu said ‘weaponry is taught a great deal, as it helps to keep students interested and I like my students to have an overall interest and knowledge of all budo. Dan grades form their own personality, so they are not just like thousands of other black belt karateka’.

In 1977 Mr Nanbu made three visits to Britain instructing at the Bushiki clubs on each visit. Needless to say, I was at them all. In 1978 Mr Nanbu, for reasons of his own, decided to leave Sankukai and go back to his roots and rethink his ideas, emerging later that year with Nanbudo.

I have trained within Nanbudo a few times since he left Sankukai, once some years ago, and a few times in the last four years, but on all of those occasions decided to stay with Sankukai, at seventy one years, I’m too old to change! But, I do still admire Master Nanbu immensely, I also believe him to be one of the worlds great karateka, and would take this opportunity to wish Doshu Nanbu all the very best for the future, in whatever he does, I just wish it was within Sankukai.